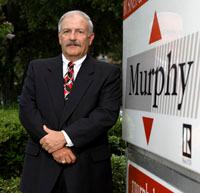 Roger Murphy, the founder of the leading business brokerage firm, Murphy Business, had that type of significant impact before he passed earlier this winter.  Greybull Stewardship invested alongside Roger in Murphy Business starting in 2014 and increased our ownership in subsequent years.  We were honored to know him. And to be business partners with him for a few years.

Contributing and making places for others

One of the leaders of the Murphy organization in the Mountain West for a number of years was Ezra Grantham.  Last year, Ezra wrote a wonderful note to Roger about the significant impact that Roger and his organization had on many people.

Hi Roger, I thought I would touch base and give you some reflections I have:

They did a survey of a group of senior citizens in the last part of their lives to determine what their worst fears were? They expected fear of a lack of enough money to finish out, or fear of poor health would be at the top. To their surprise the number one fear was ” a lack of significance.”  Either that they had not done anything significant in their lives , or were no longer significant to anyone else. When they were gone nothing would be left behind and they would be soon forgotten.

Recruit and mentor others

With you and Murphy Business I see the opposite. You have not only lived ( and are living) a significant life, but you are contributing and making it possible for so many others to do so as well. In my own case in the 8-9 years I was fully active with Murphy I earned a nice sum in commissions and then sold out for a nice multiple. All made possible by you and the system you set up. More importantly than that was being able to recruit and help mentor some other good folks who will have their own story to tell. For all of us it’s more then earning a living . It’s the pride we have in having the tools and backing to do a good job for our clients and the pride we have in being able to feel like we have been successful ( significant in some way).

So my hat is once again off to you  my friend. You have been significant in my life and I thank you once again for all you have done for me. Have a great convention and KEEP UP THE GOOD WORK! 🙂 Ezra