Five out of six of the fastest growing companies in the US grow with capital from sources other than traditional venture capital.  How about the banks? Talked to an entrepreneurial banker lately? Didn’t think so. Bootstrap companies are creative in finding capital, often out of simple necessity.  This often creates stronger companies because an abundance of capital did not allow them to delay addressing their flaws. 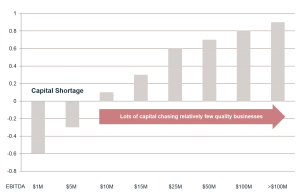 The chart here shows research done at Pepperdine University on the capital shortage for smaller companies.  My fund, Greybull Stewardship, works to fill this need for capital that is not being met by traditional venture capital and private equity funds.

This dynamic among smaller companies stands in stark contract to the dynamic for larger and publicly-traded companies.  Since 1997, the quantity of publicly traded companies has fallen by half, to 3,200.  While the quantity of dollars under hedge-fund management has increased by 2,500%.  It is no wonder that hedge funds have under performed lately. So much capital chases so many fewer publicly traded companies.  If an investor seeks an edge, she can more likely find it in the smaller valuations. An edge in the larger valuations now becomes harder to find.

Bootstrapped company owners have the traditional problems of growing companies — expansion opportunities, family wealth diversification. But they don’t have the traditional sources of investment capital. And, those traditional sources also may not be aligned mutually with objectives for growth rates, exit timelines, governance, and more.  At Greybull Stewardship, our goal continues to be the perfect capital partner for bootstrapped companies. And then we place as few restrictions on the company as possible from the fund.  We grow as it makes sense. We do not force a sale on an artificial timeline.  Greybull does this because we started out as company founders, not investment bankers. We believe that providing this freedom to pursue the best strategy for the company leads to the best long-term financial returns for ourselves and our investors.