Economies of Scale — Fundamentals Through Graphics 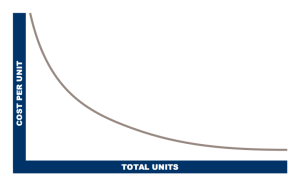 Revisiting fundamental business concepts is helpful.  Old concepts often have new meaning when viewed after new experiences.  Or, as we say at the school where I am a co-owner, “See it with today’s eyes and hear it with today’s ears.”

One important, fundamental concept is the idea of economies of scale, or the Experience Curve, as developed by the Boston Consulting Group in 1966.  As described by the Harvard Business Review, this concept captured the notion that companies develop competitive advantage by learning over time how to lower costs, gain efficiencies, and improve products by redesigning and utilizing better technology.  As shown in the chart, the cost per unit goes down as the number of units goes up.  Therefore, if your company is the largest producer in a given market, your company should have a persistent advantage in having lower costs per unit.

In my mind, I am trying to think about this concept in today’s world as I fight a bias that this concept was more relevant in large scale enterprises that seemed to dominate in the mid 20-th century but are not as impressive as the more efficient (capital and labor efficiency) enterprises of today.  In the classic sense, economies of scale usually speak to businesses that have high up-front, fixed costs and relatively low run costs per unit.  I suppose that many of the products of modern enterprises have zero marginal cost (Windows operating system, a new Google search, a new Facebook user, one more view of a movie on Netflix, etc.) but they did require large, up-front investments to build Windows, for example.  Some of these more modern examples are benefiting more from network effects than from old-fashioned economies of scale.

There must still be an advantage with scale as the Fortune reported in June 2012 that for the Fortune 500 the average revenue per employee was $455,000 and the average profit per worker was $32,000 in 2011.  Those are pretty strong numbers as compared to the smaller companies with which I am familiar.

Economies of Scale – Some Thoughts:

5 Responses to "Economies of Scale — Fundamentals Through Graphics"