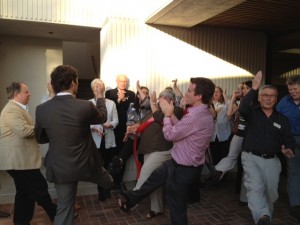 In a very difficult environment for small vocational schools recently, the National Holistic Institute, one of the best massage schools in the country where I am a co-owner, is surviving and thriving.  A key reason behind the organization’s success is its unique, palpable company culture and mission.  This was apparent at the grand opening ceremony last week at NHI’s new campus in Santa Ana, California — the photo nearby is of some NHI staff members doing the “whoosh” after the ribbon-cutting in Santa Ana.  The whoosh is a unique cultural element mentioned below.  The National Holistic Institute has been able to add campuses during the last few years even though I have received 6 phone calls in the last two months from massage schools in various parts of the country that are in distress.  This is due to new regulatory requirements from state and federal agencies aimed primarily at the large, publicly-traded companies that is having a very negative impact on small schools without the resources to handle the increased requirements.

Why is NHI so strong?  To me, the primary reason is the strong company culture of the organization.  As James Haskett of the Harvard Business School writes, “Culture can account for up to half of the difference in operating income between two organizations in the same business”.  The National Holistic Institute had a very strong company culture when my business partner and I purchased the business in 2003.  It was one of the top three reasons we loved the organization:  the other two were the people (attracted to the organization because of the company culture) and the systems in place that created a high-quality experience for students and made the organization more scalable.  Fortunately, we have been able to avoid messing up the company culture and have even strengthened it a bit.  At the companies that I invest in through Greybull Stewardship, a key objective of mine is to help them maintain the unique elements of their company culture and strengthen them over time.  This is because a long-term, sustainable competitive advantage is usually through activities that a company does differently than its competition and company culture is a vital element to the differences that create competitive advantages.

Haskett mentions several other things in his book The Culture Cycle to think about with your company:

For NHI, there are cultural elements that developed out of creating the best learning environment that we can for our students. These are things such as a very conscious establishment of a “safe space” in every class, the philosophy that every class (and as many other communications as we can) should include audio, visual, and kinesthetic methods to help every student learn, reasonable breaks (as a wise man once said, “the brain can only absorb as long as the butt can endure”), opening exercises to classes and company meetings to set the tone, and one of the most fun elements for me, the “whoosh”.  The whoosh was developed by a Thai Chi master to help students bring closure to the information they just absorbed and open the mind for the next activity.  It is done before breaks and at the end of a class or meeting.  It combines movement (a swing of the leg and simultaneous clap) and sound (everyone saying together “whoosh”) to bring closure to a segment or activity.  It is a fun thing that serves as a constant reminder to all staff and students that our company culture is a strength and we like how the “whoosh” represents our differences. 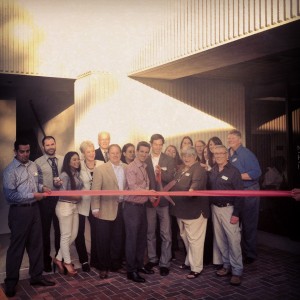 Here are some quotes from some luminaries about the importance of a company’s culture:

“I came to see, in my time at IBM, that culture isn’t just one aspect of the game — it is the game . . . If the CEO isn’t living and preaching the culture and isn’t doing it consistently, then it just doesn’thappen.”  Louis Gerstner, as Chairman and CEO of IBM

“Our belief is that if you get the culture right, most of the other stuff — like great customer service, or building a great long-term brand, or passionate employees and customers — wil happen naturally on its own.”  Tony Hsieh, CEO of Zappos.com.