This last difference is the easiest to quantify as did Charlie Munger of Berkshire Hathaway in a talk to the University of Southern California Marshall School of Business on April 14, 1994.  Whenever possible, a buy and hold strategy has many advantages, including the built-in tax advantage of capital gains.

Another very simple effect I very seldom see discussed either by investment managers or anybody else is the effect of taxes.  If you’re going to buy something that compounds for thirty years at fifteen percent per annum and you pay one thirty-five percent tax at the very end, the way that works out is that after taxes, you keep 13.3 percent per annum. 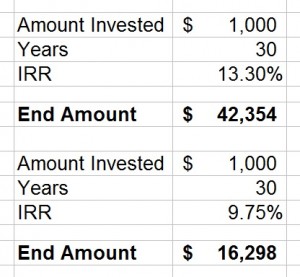 In contrast, if you bought the same investment but had to pay taxes every year of thirty-five percent out of the fifteen percent that you earned, then your return would be fifteen percent minus thirty-five percent of fifteen percent — or only 9.75 percent per year compounded.  So the difference there is over 3.5 percent.  And what 3.5 percent does to the numbers over long holding periods like thirty years is truly eye-opening.  If you sit on your ass for long, long stretches in great companies, you can get a huge edge from nothing but the way income taxes work.

Even with ten percent per annum investment, paying a thirty-five percent tax at the end gives you 8.3 percent after taxes as an annual compounded result after thirty years.  In contrast, if you pay the thirty-five percent each year instead of at the end, your annual result goes down to 6.5 percent.  So you add nearly two percent of after-tax return per annum if you only achieve an average return by historical standards from common stock investments in companies with low dividend payout ratios.

But in terms of business mistakes that I’ve seen over a long lifetime, I would say that trying to minimize taxes too much is one of the great standard causes of really dumb mistakes.  I see terrible mistakes from people being overly motivated by tax considerations.

My investment fund, Greybull Stewardship, is built to buy-and-hold when and if possible.  It is an evergreen fund structure that does not force us to sell companies when we do not think it is a good idea.

I am off to the Berkshire Hathaway annual meeting this week, so please look me up if you will be there.