May 5th, 2014
For those you have not attended a Berkshire Hathaway annual meeting, picture this scene at the 2014 meeting. 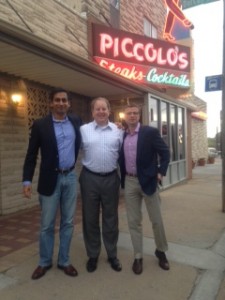 A stadium is filled to its capacity of 30,000 people with another 8,000 in overflow rooms at the adjacent conference center and hotel.  For nearly six hours, Warren Buffet (age 83) and Charlie Munger (age 90) answer questions from three journalists, three analysts, and shareholders in a rotation.  Over 60 questions are asked.  I have been attending the meetings consistently since the 1990’s.
At this year’s meeting held on Saturday, here are some of my notes from this year’s question and answer session.

One Response to "Berkshire Hathaway Annual Meeting Notes for 2014"